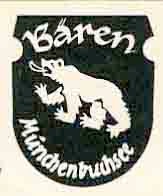 Anton Räderscheidt and his family came to the “Bären” hotel in Münchenbuchsee in October 1943, through the intercession of the Basel museum director Georg Schmid, whom he still knew from Cologne and who saved him and his family from the threat of expulsion in an attic as a “private internee” without Work permit under. Anton Räderscheidt wrote in his diary “It was particularly difficult for me in Switzerland because everything was reluctant to speak the language, so I stayed with French, which in German-speaking Switzerland did not result in any strong contact. The advantage was that I was now considered French and the Swiss were crazy about French painting. ” For a foreign painter, however, the sale of his pictures is forbidden if he lives in the country, so that the prices obtained were extraordinarily low. He began to work again, but could hardly sell his works for cash, although they were very popular, mostly only exchanging them for natural produce, but he increasingly needed more money to cover the medical costs of Ilse Salberg, who was suffering from cancer. For Räderscheidt, as for many other artists, exile in Switzerland means not only a protective reserve with relative freedom but also, not least because of the work ban for stateless foreigners, an almost hermetic, artistic and cultural isolation from the outside world. Although this suited his disposition to be a loner and outsider, even he felt isolated in a way that was difficult to bear. Contacts to France and Germany, where the fine arts had been pushed underground but lived on, were no longer possible during the war. It was not until 1946 that Räderscheidt was able to resume his correspondence with Franz Roh, whom he supplied with parcels from Switzerland. His relationship with other exiles, among whom there were only a few visual artists, was limited to participating in an exhibition of the “Peintres refugies”, which took place in 1944 in the Bern art gallery. The only other connections that remained for him were his acquaintance with Georg Schmidt and, since moving to Bern in 1944, with the collector Hermann Rupf, who regularly bought from him. Even “due to a lack of outside life” he only had to withdraw into his painting.

He worked in almost complete seclusion without external stimulants and rediscovered modernity for himself in order to regenerate himself through painterly engagement with it. Räderscheidt’s return to the modernisms of the early 20th century corresponds to a general tendency that began with the end of the war, which he, favored by the relatively free and secure life in Switzerland, earlier than most of his from the Hitler dictatorship and the paralysis of the cultural life during the war.