Franz Lambert Jansen (Franz M. Jansen) was born on February 4, 1885 in Cologne (Friedenstrasse 36-39). His parents, the businessman Peter Franz Jansen (1855-1924) and his wife Margaretha, born Manstetten (1856-1931), belonged to the middle class and tried to give their eight children a solid education. After Jansen had attended elementary school and grammar school, the father, who did not want to turn his son’s passion for painting into a profession, decided that Jansen should complete a solid craftsmanship training and finally study architecture in order to reconcile his artistic inclinations with a middle-class existence to be able to. Dismissed in 1901 at the age of one (“Mittlere Reife”) from the “Katholisches Gymnasium an Marzellen” in Cologne, Jansen began an apprenticeship as a bricklayer, which lasted until 1903. He then attended the “Königliche Baugewerkschule” in Cologne for a year and completed the traineeship required for studying in 1905 with the architect Franz Brantzky (1871-1945). The first drawings were made during this time, mostly illustrating motifs from the vicinity of Cologne. 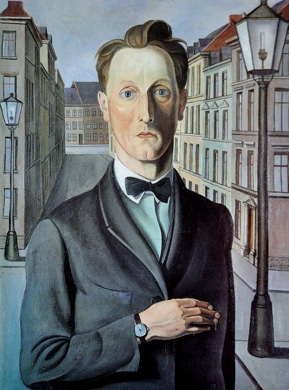 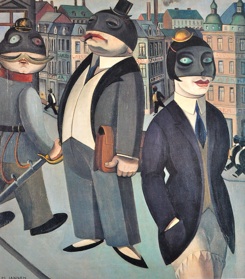 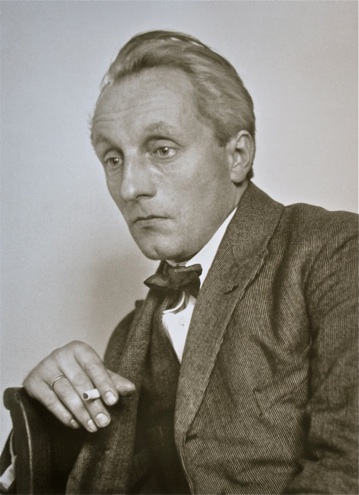 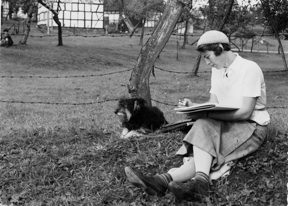 Against the resistance of her parents, he married the painter Mathilde (“Fifi”) Kreutzer (1891-1977), daughter of the well-known Bonn professor Johannes Kreutzer (1858-1937) on February 3, 1917. Jansen knew and loved Mathilde Kreutzer since 1908 at the latest and since then has signed his pictures with F. M. (= Mathilde) Jansen (the marriage remained childless). Both had disregarded their parents’ denominational objections to the marriage and moved to Winterscheid (Siegkreis) shortly after the end of the war. 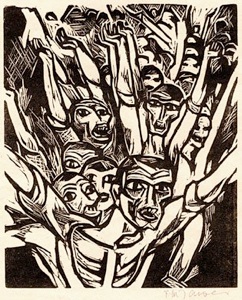 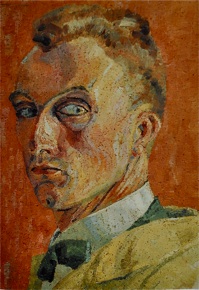 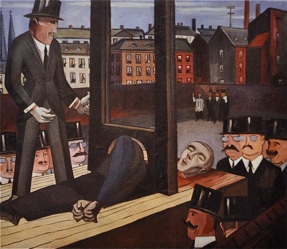 The “Cologne Secession” was founded as part of the second wave of secessionist efforts by young artists all over Germany as an instrument of resistance and protest against established and institutionalized art. “The various secession movements were a demonstration or a rebellion against” the “politically justified and clumsy compulsory regulation of an unenlightened academic art and an imperial conception of culture.” (Arno J. Mayer) The aim was to strive from the arbitrariness of naturalism towards new stylizing tendencies. It was precisely the oversaturated atmosphere of the prewar period that prompted young artists to search for new forms of expression, which found expression in their expressionist endeavors. The rejection of traditional traditions and bourgeois indolence was also the only unifying factor that united the most diverse artistic movements within the artists’ associations. The openness to the efforts to innovate in international modern art and the rejection of the ornamental stylization and harmonization of the previous Art Nouveau shaped the basic attitude of the artists. One broke ruthlessly with tradition and turned to a violent, exaggerated and high-contrast, reduced formal language. One of the co-founders of the “Cologne Secession” was August Deusser (1870-1954), who also chaired the association. In 1912 and 1913 the “Cologne Secession” organized two exhibitions in which Jansen took part. 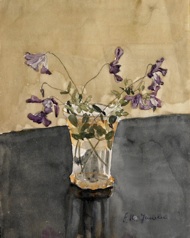 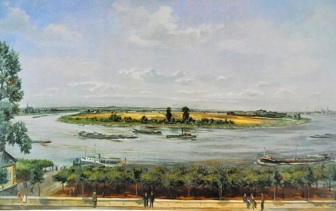 The relationships between August Sander and F.M. Jansen were also diverse and go back at least to the mid-1910s. Sander and Jansen knew each other well, they corresponded with each other and socialized in overlapping circles of friends and artists, including the “group of progressive artists” in Cologne. During this time, Sander reproduced many paintings by F.M.Jansen. Even before 1917, F.M. Jansen had created a large mural in the stairwell of the Sander family in Cologne-Lindenthal, through which the clientele reached the photographer’s studio. As one of his trusted artist friends, a portrait of Jansen found its way into Sander’s portrait work “People of the 20th Century” (group of artists). In 1926 he was invited to the “Exhibition of Revolutionary Art of the West” in Moscow, where he was shown alongside Hoerle, Dix, Seiwert and Anton Räderscheidt. However, he made less and less socially critical woodcuts, but turned more to landscape painting. The cycle Der Rhein (30 etchings), from which he showed pieces in December 1925 at the “1st exhibition of the (new) Cologne Secession” and in November 1926 at the “2nd exhibition of the (new) Cologne Secession” in the Kunstverein, shows his final turn to the “New Objectivity”, which in May 1927 brought him an invitation to the exhibition “The New Objectivity in Painting” at the Kunstverein Göttingen. Finally, the jury of the exhibition “German Art Düsseldorf 1928” awarded him the “Prize of the Rhenish Provincial Administration” (for the picture Bröltallandschaft) of 500 RM.

“We call ourselves the Rhine Group, which expresses the fact that we have something to do with the Rhine as a landscape, that we did not sit or stay here by chance, but that we believe that we are doing some cultural and political work which we couldnt do better in any other place, on the other hand we believe that the spirit of this landscape seeks expression in our work and that our work bears witness to the spirit of the landscape. “ 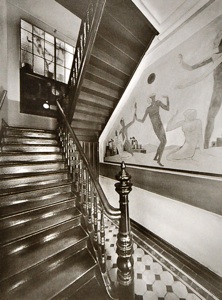 1936 Staircase in the house of the Sander family, on the right a mural by F.M. Jansen 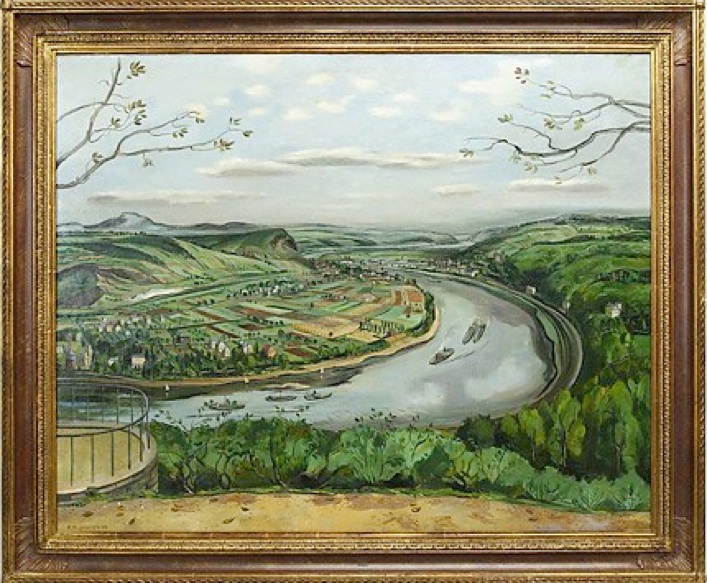 When the Nazis came to power in Germany in January 1933, Jansen was not one of the artists who had to leave Germany, such as George Grosz or Franz Pfemfert. The new rulers welcomed everyone who wanted to stay in Germany and submit to their cultural norms, which Adolf Hitler propagated, for example, at the opening of the “House of German Art” on July 18, 1937: Until the National Socialists came to power there was a so-called “modern” art in Germany, i.e., as it is in the essence of this word, it was different almost every year. National Socialist Germany, however, wants German art again, and this, like all creative values, should and will be eternal. But if it lacks such an eternal value for our people, then it is also without a higher value today. Jansen’s monumental oil paintings of the “New Objectivity” adapted to these norms early on, and so it was logically shown in March 1933 at a jury-free exhibition in Berlin. His membership in the professional organization of the “Reich Chamber of Culture” was necessary for this participation. In 1934 Jansen built his own house in Büchel, less than a kilometer from Felderhoferbrücke, and moved. For the first time, his life was financially secure. The successes of the 30s had given him a certain financial independence, which allowed him to build a house. His desire to travel had ebbed, and in the two studios he had set up in the house, he and Fifi Kreutzer-Jansen carried out commissioned work: In the same year, he designed the wall paintings at Cologne University together with Jakob Berwanger (born 1900) under the motto German man in German landscape (figure height 160 cm), after he had received a 1st prize for his design German races in a competition advertised by the university (completed by 1935). At this point, at the latest, he made another transition: from the “New Objectivity” to the ideologically propagated art of local and rural panoramas, which the Nazi rulers awarded the certificate “Eternal Value”. Franz Lambert Jansen died – impoverished – on May 21, 1958 in Büchel 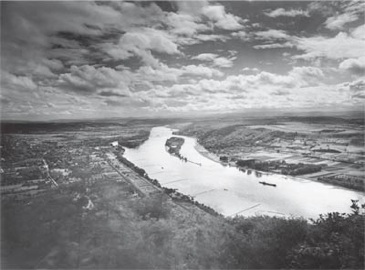