In the lost work Painter and Model from 1926, Räderscheidt, like Dix, distances himself from his nude model. In the foreground on the right, the painter presents himself in a black suit, white shirt and bow tie, facing the viewer in front of a blank canvas that stands on an easel. He holds the palette in front of his abdomen and, in his cramped, awkward posture, doesn’t seem ready to start work. The expectant gaze rests on the viewer. In the background stands the naked model with a fashionable bob haircut on a pedestal, legs closed, arms slightly spread, holding her left arm a little further out and pointing her hand somewhat helplessly at the painter and canvas. Her body with a stocky torso has no waist. Despite the compact physiognomy, the figure seems weightless. The bulging curves on the chest, stomach and hips appear inflated. In addition, both the pedestal and her feet are folded into the surface in perspective, so that the puppet-like nude does not have a firm footing. Both figures look at the viewer. […] Due to the tilting perspective of the empty space and the frozen figures, the scene turns into a dull dream, presumably underscored by the tonal, subdued color that was typical of Räderscheidt in the mid-1920s. Reality of the studio and fiction blur. […] 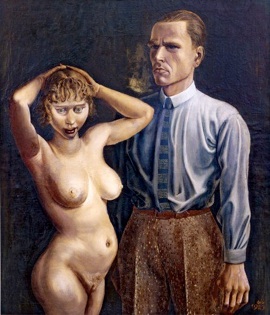 …It is these adjustments that give the picture an unreal, oppressive atmosphere. While the man, stiff and awkward, forms a unit with the easel, the floating nude is, compared to Dix’ and Dressler’s models, an unreal montage of a portrait-like head and doll’s body. This combination of reality and surreality represents the entire picture and describes the conception of art by the magical realism of Räderscheidt. The physical contrasts between man and woman reinforce the strangeness and distance that exist between the painter and his model, both emotionally and spatially. Instead of an inspiring, erotic relationship between the muse and the artist, the artist has almost fearfully turned away from his subject. Unlike Dix, he is not the dominant coolly dissecting observer dominating the situation. His canvas remains. as with Dressler, emptiness However, it is not the transience of life that speaks in Räderscheidt’s picture, which is taken out of the flow of time, but rather an almost timeless emptiness. which man and woman cannot overcome. They have become strangers to each other and are frozen in their roles as painter and model, unable to act. 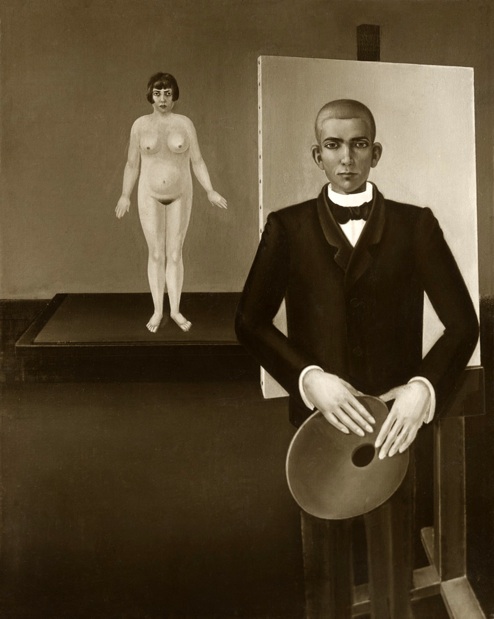 Painter with Model, 1926
Oil on Canvas 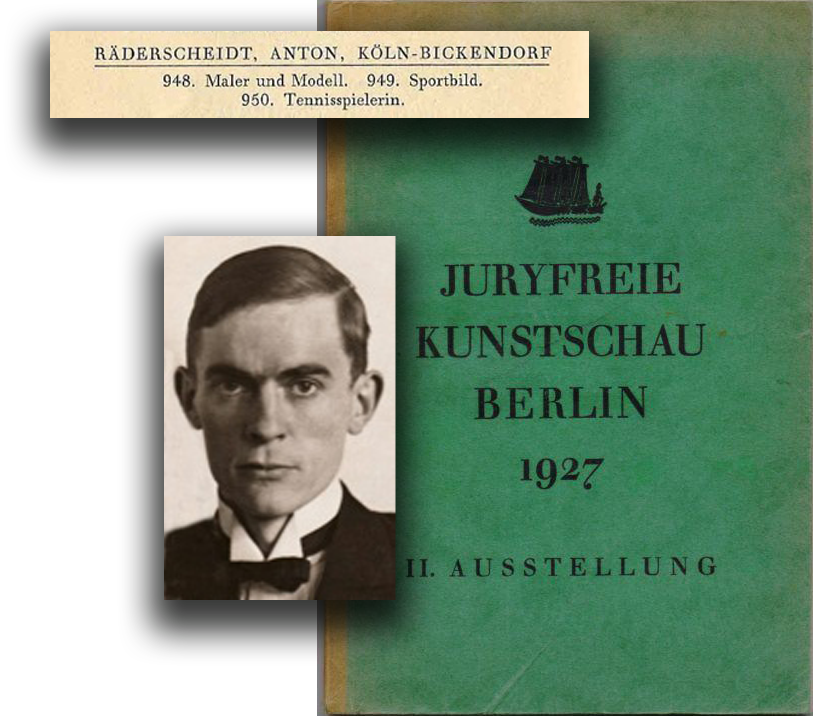 “What’s going on here from the studio” (such a one is available)! A distracting milieu becomes an insubstantial spatial structure, the floor becomes a giant slab suspended in space, reaching far back to the horizon. The longing contrast between the darkening, extreme closeness of the man covered to the top and the moonshine-shimmering distance of the naked woman, who no longer seems to be standing in front of a wall, but in the great emptiness of free space, which falls down behind the pedestal, is telling. Strange is the encounter with the painting board, on whose snow-white, shimmering integrity the painter’s upper body appears to be imprinted, as if reality here were merging into mere appearance, while the limbs below have become eerily lignified to form the rods of the easel. These are all expressive approximations [Herv. Raw]. may they have arisen consciously or unconsciously.
Roh, Franz: Recent Lower Rhine painting. In Das Kunstblatt 10 (1926). pp. 363-368, here pp. 366/367. 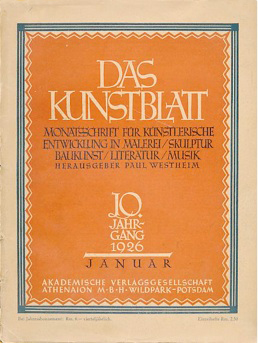