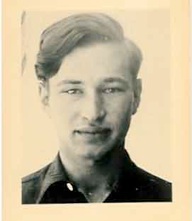 Ernst Meyer, son of Ilse Salberg from her first marriage, born on January 20, 1923, was arrested by French gendarmes in Barjols on September 7, 1942, deported to Germany and killed by the Nazis in Auschwitz that same year. In Serge Klarsfeld’s register: “Le mémorial de la deportation des Juifs en France”, it says that Ernst Meyer arrived in Drancy on September 7, 1942, was loaded there “at the last minute” and arrived in Auschwitz on September 9, where he was immediately killed.