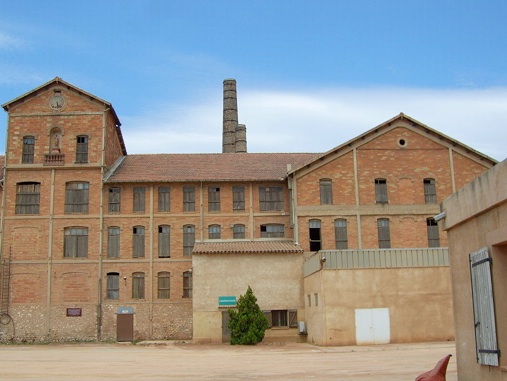 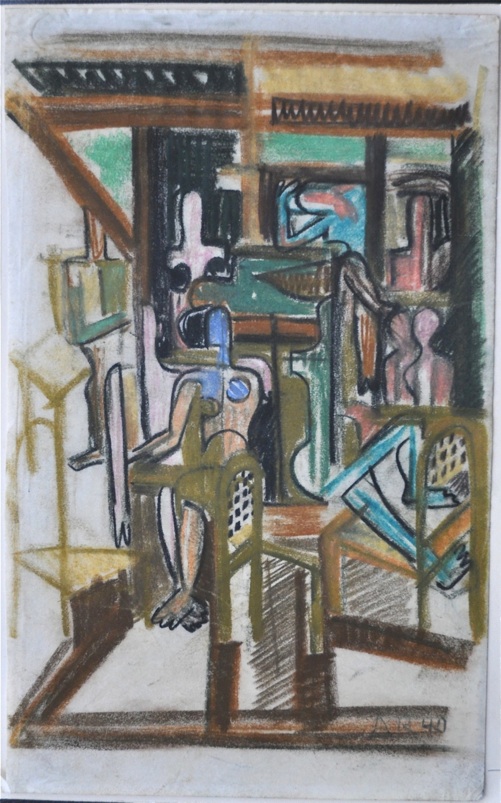 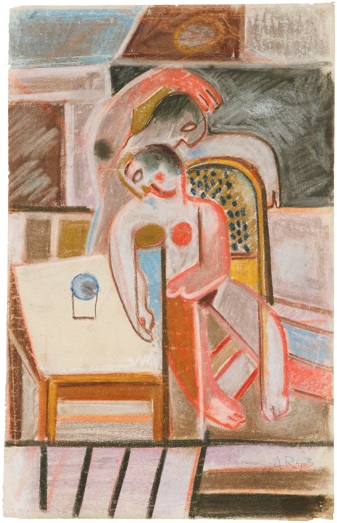 In the internment camp “Les Milles”, a former brick factory near Toulon, the Petain government detained many German artists, including Max Ernst, Anton Räderscheidt, Wols, Feuchtwanger, behind walls and barbed wire. In the brickworks, murals are still reminiscent of the macabre center of German intellectual life. The situation of the emigrants, who in France, as a classic asylum country, felt in relative security and seemed to enjoy the sympathy of their host country, had steadily deteriorated since May 1938. Little by little, a whole catalog of measures and laws regulating the registration and surveillance of immigrant foreigners was drawn up and preparations were made for their internment. In the spring of 1939 the nervousness of the French government had grown. Foreigners, especially Germans, were considered extremely suspicious at the time. The conservative press did its part to incite the French public against the foreign population. A National Socialist secret agent was potentially to be suspected in every German tourist. The conservative newspaper “Le Jour’ “had already suggested in an article from September 1938 that foreigners should be interned in camps for more complete guarding.

In the spring of 1939, the refugees from the Spanish civil war were detained in reception and assembly camps; Immediately after the outbreak of war, the second wave of internments took place, which was directed against the German emigrants. On September 7, 1939, all male emigrants between the ages of seventeen and fifty were publicly announced to come to the assembly camps closest to them in order to be checked by the French military authorities. For Anton Räderscheidt, Gert Kaden and Alfred Kantorowicz, this meant meeting the next day in the so-called “Barracks of Toulon”. Alfred Kantorowicz reports in his book “Exile in France” about life in this camp, which was still one of the more humane. Today we owe the little information about Räderscheidt’s life during the years 1939 to 1942 to his diary entries, on which this work is based, and the memories of other inmates and fellow sufferers – a time that must have been the worst of his life for Räderscheidt and which we need to talk about he always refused later. It was then that the disaster of war reached the height of its effects on the lives of people who, even if they survived, all too often remained broken in body and mind. There are no camp reports that do not talk about depression, madness and suicide. Of course, this extreme existential threat had to have an impact on the artistic potential of the abused people. The true extent of the resulting damage, which could only be measured in terms of the survivors, has hardly been recognized, let alone appreciated, to this day. Even a well-intentioned and memorable sentence like that of Theodor W. Adorno that one could no longer write poems after Auschwitz means, in its aestheticization, a quick and repressive removal of the problem that silences the individual artist’s fate and thus each individual affected.

Of course you could still write poems after Auschwitz, but how could you still write them, how could those affected still write them? With a few exceptions, this question has largely been evaded to this day and has thus missed an opportunity to make reparation where it would have been most needed, to the artistic personality of the victims through the appropriate appreciation of their work after Auschwitz. In the following, in order to do justice to Räderscheidt’s artistic personality, the circumstances of his life at that time must first be discussed in detail, and the contemporary witnesses themselves should speak to describe them as authentically as possible. Kantorowicz (who lived in Bormes, sixty kilometers from Sanary) and Räderscheidt only got to know each other in the camp, where, as Kantorowicz writes, they formed “a small table community” with other inmates, “in the evening by candlelight based on some sketches by Räderscheidt about abstracts Painting discussed «and made friends. After nine days, on September 17th, Räderscheidt, Kantorowicz and their fellow sufferers were deported to the Les Milles assembly camp near Aix-en-Provence under the abuse of the population, who they believed were captured Nazis. There, based on the expatriation lists published in the German ‘Reichsanzeiger’, their political harmlessness was to be checked and, as it turned out for Räderscheidt after a day or two, for Kantorowicz on September 23, they would be able to return to their families in Sanary and Bormes. Räderscheidt and Kantorowicz saw each other again at the turn of the year 1939/40 when the writer and his wife Friedel visited Marta and Lion Feuchtwanger in Sanary, whose Valmer villa was right next to the Räderscheidts and Ilse Salbergs. Kantorowicz writes about his visit to “Le Patio”: “The hours spent with Feuchtwanger’s neighbor, the painter Anton Räderscheidt, whose” demeanor “(I use this term deliberately) in the barracks in Toulon, I had come to appreciate, were relaxing in a different way. He was a tall, slender man in his late forties, with a narrow, elongated face, of a closed, somewhat grumpy nature.

He was a tall, slender man in his late forties, with a narrow, elongated face, of a closed, somewhat grumpy nature. was the woman with whom and whose son he lived together, according to the Nuremberg Race Laws, “not entirely impeccable”. Even as an artist, he did not meet the primitivism of the successful gentlemen from the Reich Association of German Artists. He had had success with his (post-Expressionist) portraits in the twenties. Since he had remained uncompromising, he was declared a “degenerate artist” and his paintings in Cologne, Düsseldorf, Essen, Krefeld, Nuremberg and Berlin museums were destroyed. It was relaxing to talk to him about literature or politics, but about art (and I had a lot to learn there), or you kept silent with him about what you can do with a few people. Life in freedom should not last long for the German emigrants. The start of the Hitler offensive against the West, the Netherlands, Belgium and France gave rise to bad fears and as early as May 14, 1940, the press announced that all male emigrants who were released between the ages of seventeen and sixty-five would be interned again. Shortly after Marshal Petain’s appointment as Deputy Prime Minister on May 18, Räderscheidt and Ernst Meyer, who had come to Sanary from his boarding school in London when the war broke out, were asked to report to the Les Milles camp on May 21. Lion Feuchtwanger describes in his book ‘The Devil in France’ 189 how they had a pass issued the day before at the mayor’s office in Sanary and set out for Les Milles. ‘We were four of us who had to leave for Les Milles tomorrow: that painter R. . [Räderscheidt], my neighbor, then his son, who had just turned seventeen and had to believe in it, then me, and finally the writer K.

[Kantorowicz], a German who fought on the side of the Republic in Spain. Just as Ludwig Marcuse Sanary represented the “capital of German literature” in the twenties and thirties, the French internment camps must now be viewed retrospectively as centers of German culture. Under precarious circumstances, personalities who had had a decisive influence on cultural life in Germany met again in Les Milles: Walter Hasenclever, Golo Mann, Max Ernst, Wols (Wolfgang Otto Alfred Schulze-Battman), Hans Bellmer and Räderscheidt’s closest friend Heinrich Maria Davringhausen to name just a few. Life in the camp at Les Milles, a disused brick factory in which 3,000 emigrants were interned, is described in detail and vividly by many inmates, especially by Feuchtwanger and Kantorowicz. “We were housed in a brick building, and the bricks were the hallmark of that time. Brick walls, secured by barbed wire, closed off our courtyards from the beautiful, green landscape outside, crumbling bricks were stacked everywhere, they served us as seats and tables, also to separate the straw beds of one from the other. Brick dust filled our lungs, inflamed our eyes. Slatted frames for the bricks ran along the walls of the halls and took us even further away from the sparse space and from the sparse light, and when we were cold one or the other of us might crawl into one of the large empty stoves, which were intended for the manufacture of the bricks, and warm to the associations of the word stove. We had to carry the bricks around, now we stacked them here, now there. We wheeled them around in wheelbarrows, and then, under the command of a sergeant, tossed them from hand to hand and layered them in a certain order. The work wasn’t exactly difficult:

What was actionable and outrageous about it was its utter futility, because it was not given to us for a specific purpose, we wanted to be heard. We have, tomorrow or the day after tomorrow or at the latest on the last day, we have heard the beautiful stacks of bricks again and have received the new new rights. «In addition to suffering and typhus and dysentery in their senselessness around and suffering, aided by catastrophic hygienic ways, bedding and how they say goodbye to worries about their wives and children, as they learned, die bald after their own in the The Gurs Pyrenees camp indicated were deported. 192 For many unbearable wars, which in the end the danger of becoming the repeatedly advancing National Socialists, which includes the political government under Peta in the armistice agreement of June 22nd, said Walter Einasen Tag, on 21 June 1940, Walter Hasenclever committed suicide in Les Milles, not realizing that the last day would bring a turning point, which Franz Schönberner, the last editor-in-chief of the Simplicissimus interned in Les Milles, in his book Inner Views of an Aufeiters. On the day of the signing of the armistice agreement, including its extradition paragraphs, there was a transport handicapped access, for which an extradition belongs to the same death. A train to bring the other men to Bayonne, from where they are to be shipped to North Africa. In Bayonne the transport was received with the news that the Germans would be there in two hours. Also the drive back on the same route, further and further due to the rumor of approaching German armies. In reality there was a grotesque misunderstanding before the platoon commander telephoned the transport in Bayonne. When a “Zug mit Boches” was authorized, a man of the German troops was in control, so that the painful return trip became a tragicomic escape from one’s own shadow.«

Nimes was the terminus of the so-called ghost train. All prisoners were unloaded there and had to walk to the Saint-Nicolas camp some twenty kilometers away, which the sick and exhausted could hardly cope with. “The older men put their suitcases and bundles down every few yards. Some had particularly conspicuous, large, rectangular cardboard tucked under one arm; these were the painters and graphic artists Räderscheidt, Isenburg, Max Ernst, who did not want to part with the pictures or drawings they had painted in the camp. «Räderscheidt, Ernst Meyer, Kantorowicz and Davringhausen took advantage of this the march to Saint Nicolas, which was barely manageable for the few guards, to flee.