Nudes in the New Objectivity,

from her dissertation with the above title

The lost picture “The Beauty Queen” (fig. Right) from 1930 is the last picture in the series of sports acts after the two acrobatic pictures mentioned at the beginning.

The woman is on a raised, seemingly floating stage with a surrounding railing that is reminiscent of a boxing ring. The title of the picture The Beauty Queen, which can hardly be reconciled with the idea of ​​a boxing match, is irritating.898 Similar to the tennis player, but without any sporting attributes, she stands with her legs wide apart and arms crossed behind her back facing the viewer frontally on a to the front tilting surface. The almost childlike features of the face are more typified than the “nude on parallel bars” and “the tennis player”, the eyes only hinted at. The short haircut is parted to the side. This boyish head contrasts with the female body. The round breasts with the weakly circumscribed nipples and the darkly shaded pubes take back the sculptural impression of this nude figure despite the rigid pose. Nevertheless, it also represents a doll without a life of its own and without activity.899 In the background are faceless male figures, their hands like soldiers on the seams of their pants. The woman’s posture also takes on an almost military character. In the right foreground is the “man with a stiff hat” on the top staircase in front of the platform with his back to the viewer. He holds his left arm in front of his body. In his entire posture, he is neither on the naked woman’s side nor on the side of the men in the background. It is unlikely that he will step into the ring to fight the sexes.900 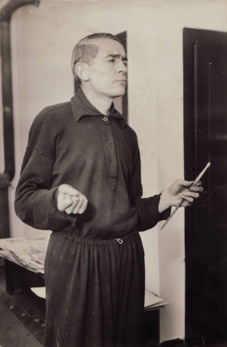 With the boxing context, Räderscheidt refers in a negating, perhaps even ironic way, to a topos that was widespread in the 1920s: In contemporary caricature, the conflicts about the dissolving role stereotypes of men and women were often associated with boxing. In the caricature shown in the first volume of the “Bilder-Lexikons der Erotik” (Picture-Encylopedia of the Erotik) (1928) “Die Siegerin” (the Winner)  by Victor Weixler 901. The female boxer, clad in only skimpy trousers, struck down the male opponent. She holds her right hand up triumphantly. The male viewers in the Background look worried and even horrified at the man lying on the ground, who with his broad cross and athletic figure should be superior to the petite woman. The winner looks mischievously at the no less astonished viewer. Räderscheidt’s vertically trapped figures seem unable to  partake in such a confrontation. 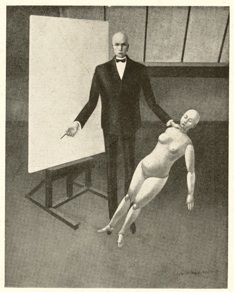 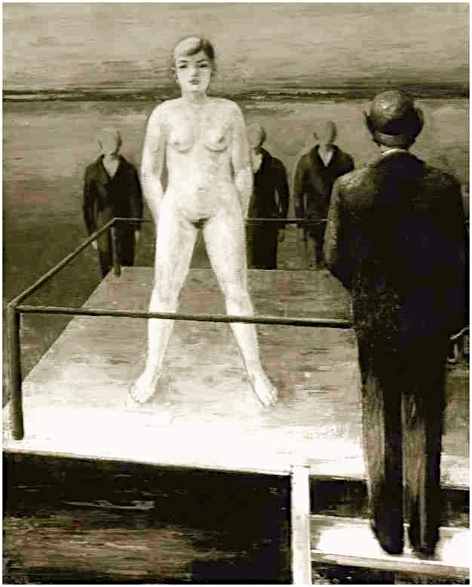 […] The aspect of voyeurism is brought up prematurely in the research literature due to the combination of naked women and dressed men.904 First of all, with Räderscheidt you should distinguish between visual and external visual relationships, between men and the nude figure as well as the viewer and the nude figure. The man with the stiff hat would have to peer over to see the woman, the posture of his head suggests a gaze fixed on the horizon. The faceless men in the background also only have a limited opportunity to look voyeuristically, especially since they stand behind the woman. In a nutshell this means, that in Räderscheidt’s interpretation the alienation of the sexes has already progressed so far that not even the passive sexuality of voyeurism is possible. Walter views the faceless men in the background as support for the woman, “they are ready to attack the man in the foreground under her leadership”: “These anonymous figures represent a multiplication of physical strength on the female side; they function as a visualization of male aspects of the beauty queen.906 However, Räderscheidt does not unilaterally assign blame to the detriment of the “masculinized” woman who is responsible for the alienation. By following the tradition of nude painting, he assigns the sportswoman to the old role of the model and at the same time breaks up its sexual availability through the design of the naked body. In contrast to the men in the picture, the viewer of the picture has an unlimited view of the woman, but he cannot let his gaze wander undisturbed and unobserved – an important characteristic of voyeurism,906 because like the tennis player, the beauty queen also returns the gaze. But is she even capable of acting in her stiff puppet-like form? 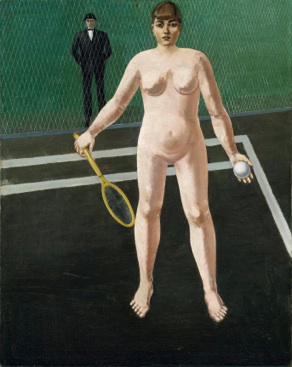 898 Rase distinguishes between two types of representation, the boxer portrait and the fight scene. The former was a popular motif in painting in the 1920s (cf. Rase 2003. pp. 161-171). Räderscheidt is not taken into account in Rase’s investigation. probably. \ Because his Beauty Queen does not fit into the typology postulated by her and her thesis of the boxer as a pagan of modern industrial society (cf. also note 815).

900 Maes (1993. p. 16/17), on the other hand, reads the picture as an affirmative allusion to the war between the sexes. In the background the voyeuristic jury stands at attention like a soldier ‘(ibid .. p. 17). Since the man holds his left arm in front of his body, Maes allows himself to be carried away to the association that he is ornate in front of the woman. This underlines his loneliness. especially since the female figure is more of a pubescent girl looking for identity. which is why the boxing ring that only reaches to the knee can also be interpreted as a playpen. This thoroughly imaginative interpretation turns out to be purely speculative when looking at the composition and the figures soberly.